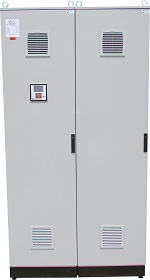 The following is a brief overview of some of the effects of negative sequence currents can have on generators and motors.

Phase current and voltage in the three-phase system can be represented in the form of three single phase components (Positive, Negative and Zero sequences).

Zero sequence components that flow during an unbalanced condition will cause the current to flow through the neutral of the power system.

There are a number of conditions which can cause the flow of three phase unbalanced currents in generators or alternators. Some of these causes include:

Unbalanced currents generate negative sequence components which in turn produces a reverse rotating field (opposite to the synchronous rotating field, which normally induces an EMF into the rotor windings) in the air gap between the stator and rotor of the machines. This reverse rotating magnetic field rotates at synchronous speeds but in opposite direction to the rotor of the machine. With respect to the rotor surface, these reverse rotating magnetic fields induces double frequency currents into the rotor body in the case of cylindrical rotating machines (generators driven by steam turbines and motors) and induce double frequency currents in the pole faces in case of salient pole machines (generators driven by hydro turbines). This resulting induced current into the rotors will provide a high resistance path to the normal induced currents (generated due to synchronous rotating magnetic field) resulting in rapid heating. This heating effect in turn results in the loss of mechanical integrity and insulation failures in electrical machines within seconds. Therefore, it is not advisable to operate the machine during an unbalanced condition when negative sequence currents flow in the rotor.

The flow of unbalanced currents in to the induction motor can be caused due to:

For more information or to place an order